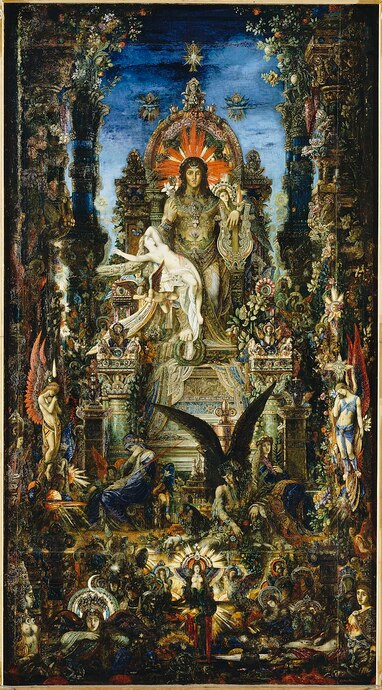 The third Dionysus, they say, was born in Boeotian Thebes of Zeus and Semelê, the daughter of Cadmus. The myth runs as follows: Zeus had become enamoured of Semelê and often, lured by her beauty, had consorted with her, but Hera, being jealous and anxious to punish the girl, assumed the form of one of the women who was an intimate of Semelê's and led her on to her ruin; for she suggested to her that Zeus should lie with her while having the same majesty and honour in his outward appearance as when he took Hera to his arms. Consequently Zeus, at the request of Semelê that she be shown the same honours as Hera, appeared to her accompanied by thunder and lightning, but Semelê, unable to endure the majesty of his grandeur, died and brought forth the babe before the appointed time. This babe Zeus quickly took and hid in his thigh, and afterwards, when the period which nature prescribed for the child's birth had completed its growth, he brought it to Nysa in Arabia. There the boy was reared by nymphs and was given the name Dionysus after his father (Dios) and after the place (Nysa); and since he grew to be of unusual beauty he at first spent his time at dances and with bands of women and in every kind of luxury and amusement, and after that, forming the women into an army and arming them with thyrsi, he made a campaign over all the inhabited world. He also instructed all men who were pious and cultivated a life of justice in the knowledge of his rites and initiated them into his mysteries, and, furthermore, in every place he held great festive assemblages and celebrated musical contests; and, in a word, he composed the quarrels between the nations and cities and created concord and deep peace where there had existed civil strifes and wars.

For the myth relates that when Dionysus was on the point of leading his force over from Asia into Europe, he concluded a treaty of friendship with Lycurgus, who was king of that part of Thrace which lies upon the Hellespont. Now when he had led the first of the Bacchantes over into a friendly land, as he thought, Lycurgus issued orders to his soldiers to fall upon them by night and to slay both Dionysus and all the Maenads, and Dionysus, learning of the plot from a man of the country who was called Charops, was struck with dismay, because his army was on the other side of the Hellespont and only a mere handful of his friends had crossed over with him. Consequently he sailed across secretly to his army, and then Lycurgus, they say, falling upon the Maenads in the city known as Nysium, slew them all, but Dionysus, bringing his forces over, conquered the Thracians in a battle, and taking Lycurgus alive put out his eyes and inflicted upon him every kind of outrage, and then crucified him. Thereupon, out of gratitude to Charops for the aid the man had rendered him, Dionysus made over to him the kingdom of the Thracians and instructed him in the secret rites connected with the initiations; and Oeagrus,  the son of Charops, then took over both the kingdom and the initiatory rites which were handed down in the mysteries, the rites which afterwards Orpheus, the son of Oeagrus, who was the superior of all men in natural gifts and education, learned from his father; Orpheus also made many changes in the practices and for that reason the rites which had been established by Dionysus were also called "Orphic." 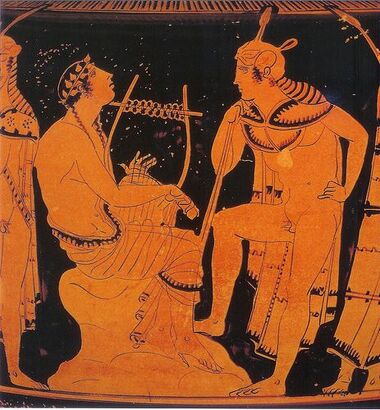 [4.25.1] But when Heracles had made the circuit of the Adriatic, and had journeyed around the gulf on foot, he came to Epirus, whence he made his way to Peloponnesus. And now that he had performed the tenth Labour he received a Command from Eurystheus to bring Cerberus up from Hades to the light of day. And assuming that it would be to his advantage for the accomplishment of this Labour, he went to Athens and took part in the Eleusinian Mysteries, Musaeus, the son of Orpheus, being at that time in charge of the initiatory rites.

[4.25.2] Since we have mentioned Orpheus it will not be inappropriate for us in passing to speak briefly about him. He was the son of Oeagrus, a Thracian by birth, and in culture and son-music and poesy he far surpassed all men of whom we have a record; for he composed a poem which was an object of wonder and excelled in its melody when it was sung. And his fame grew to such a degree that men believed that with his music he held a spell over both the wild beasts and the trees.

[4.25.3] And after he had devoted his entire time to his education and had learned whatever the myths had to say about the gods, he journeyed to Egypt, where he further increased his knowledge and so became the greatest man among the Greeks both fro his knowledge of the gods and for their rites, as well as for his poems and songs.

[4.25.4] He also took part in the expedition of the Argonauts, and because of the love held for his wife he dared the amazing deed of descending into Hades, where he entranced Persephonê by his melodious song and persuaded her to assist him in his desires and to allow him to bring up his dead wife from Hades, in this exploit resembling Dionysus; for the myths relate that Dionysus brought up his mother Semelê from Hades, and that, sharing with her his own immortality, he changed her name to Thyonê.

​But now that we have discussed Orpheus, we shall return to Heracles.
Copyright © 2016